The radio ministry at East Side Lutheran Church was started by the Reverend Harry Gregerson on the first Sunday in October of 1944 (October 1st). For many years, he desired to see a Lutheran church broadcast its regular Sunday morning service.
CONTINUE READING

On the Air Every Sunday

With the approval of the East Side Lutheran Church Council, Pastor Gregerson arranged for KSOO Radio to broadcast several Sunday services on a trial basis. The reaction of the community was so gratifying and overwhelming that the broadcast was continued. East Side Lutheran Church has been on the air every Sunday since that time. The program has always been broadcast from 11:00 am to 12:00 noon and is the longest running, continuous program on Sioux Falls radio, if not in the Upper Midwest! 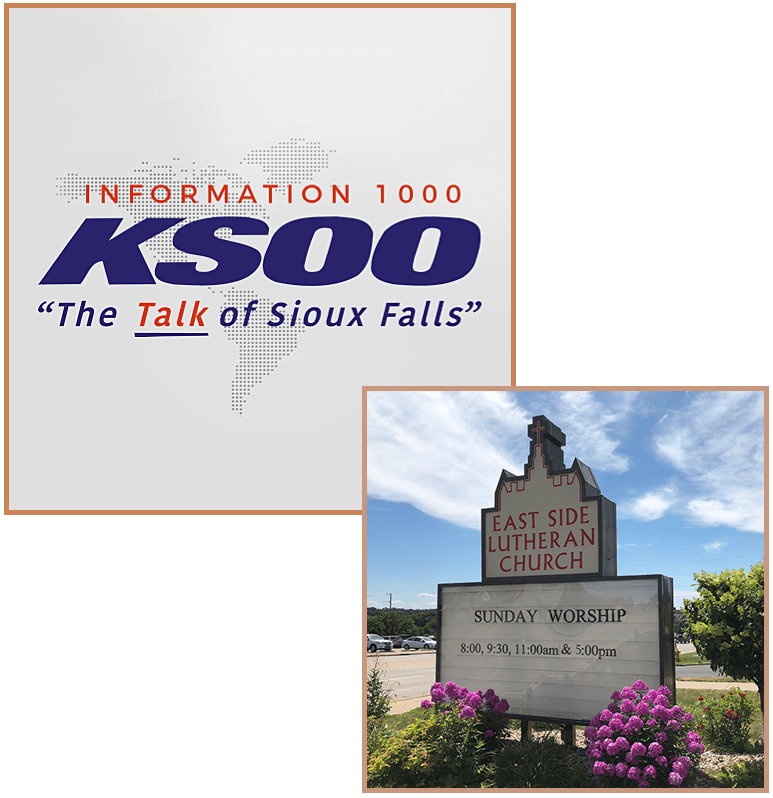 George Hanson was instrumental in setting up the mechanics of broadcasting from the church and acted as engineer and announcer for the program in its infancy. George sat in the office at East Side’s original building and turned on the various microphones, altar, pulpit, choir, and announcer as needed. In time, the equipment for producing the broadcast grew in sophistication.

The vision of Pastor Gregerson, the devotion of the early pioneers in this venture, and the continued support of East Side members have been a service to the Sioux Falls community and the surrounding area. The broadcast brings the Word of God to shut-ins and our whole community. We have listeners in South Dakota, Nebraska, Minnesota, and Iowa.

To insure continued financial support of this ministry East Side has set up the Pastor Harry and Tillie Gregerson Media Endowment Fund. The income from this fund will be used to pay for air-time on the radio (currently $255 per week), equipment purchases and repair, and for our ever-growing presence on the internet reaching the world for Christ. Members in the military, in college, wintering in the south, or traveling anywhere in the world have access to our weekly worship service.

East Side Lutheran Church extends our thanks to all who sponsor our weekly broadcasts, to our listeners, to the staff of KSOO radio, and to all who volunteer to run the soundboard and faithfully produce this important ministry week after week.